The Pool Party and Milkshakes 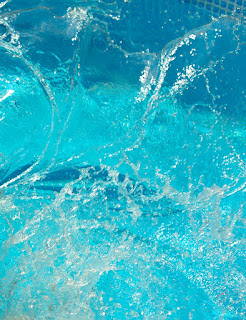 Our summer was going very well. We had made several new friends and had enjoyed some very fun and sexy dates.  We were making ourselves comfortable in our little corner of the lifestyle.

Our friends, Steve and Grace invited us over for a pool party at their house. They told us they were inviting a few other couples and planned to have an evening of swimming, dinner, and some "adult fun." This would be our first house party. We were very excited to go as well as excited to meet new friends.

We are pretty big Cards Against Humanity fans. We have all of the expansion packs. *I have to shout out to the CAH people. We flooded in 2016 (huge disaster here, like 60% of our parish flooded, 90% of our neighboring parish). We reached out to them to see if there was a way we could replace our cards at a reduced rate if we bought them all at one time. They just gave them to us. So, there's that little bit of good humanity that is completely irrelevant to my story.*

I called Grace before we headed over and offered to bring our CAH cards. She said they had not played, but had heard how much fun it is, and said she would love for me to bring them. We grabbed some alcohol and fruit to soak in it and headed to the party.

When we arrived, two other couples were already there. Grace told me she had invited the first couple (Couple A) and they had requested permission to bring their friends (Couple B); which Grace and Steve said would be fine. A third was supposed to come, but the Mrs. had gotten called into work, literally as they were pulling in the driveway.

Everyone was in the pool and Steve was at the grill. Pete and I joined the crowd in the water. Everyone was in swimsuits and other than the conversation, the party seemed pretty tame. Fast-forward through dinner. Grace asked if anyone wanted to play CAH. One of the other couples jumped at a chance to play the game and said it was their favorite!

We played six or eight hands of CAH. We were all laughing and enjoying our time, but there was a definite vibe of something else brewing. Pete and Steve headed off to the kitchen together for refills and Grace says something at me and heads to her bedroom. When they returned, Pete whispered to me that Steve was ready to move the party back into the pool. He told Pete this was the easiest way to encourage people to remove their clothing. About that time, Grace returned.... dressed! I looked over just in time to see Steve realize she's removed her suite and replaced it with street clothes. Comfy ones. I giggle and told Pete that Grace had just told me she was freezing and had gotten dressed because of this.

"Has anyone played 'Never Have I Ever?'" I asked. About half of our group had. I explained the game and added that we should play this strip version. So, when you drop your hand, you have to remove an article of clothing and once you're naked, it's pool time. Of course, everyone agreed.

"Never have I ever watched my spouse with someone else," I said, honestly and knowing that I was the only there that could say this! I wiped out the entire group of guys. All three dropped their trunks and headed to the pool. We were laughing so hard staring at all four guys standing naked in the pool. They had to be hoping we would just quit and join them. And so, we did.

The eight of us spent a while in the pool laughing, kissing, enjoying ourselves. Our group ended up all sitting with our own spouses on the tanning ledge of the pool. The husband of Couple A started talking about how his wife is a squirter. The husband of Couple B said his wife is also a squirter, but not the "usual kind" and he air quoted the words. She rolled her eyes and laughed. He began to tell us that his wife breastfed their kid, who is now seven for the first year of his life and she has never lost her supply. If you read that as she was nursing a six year old, read it again.

She reached up and grabbed her breast and began to squeeze. A literal shit ton of breastmilk started to POUR out. I mean like, "medical wonder of the world" amount of liquid, here. I jumped up, Pete jumped up, Grace and Steve jumped up, Couple A didn't move. The four of us exited the tanning ledge with haste and jumped out onto the side of the pool. The other four just sat there, laughing. I looked over at Grace and mouthed "WHAT THE FUCK?"

Grace shook her head, like she was hoping I knew the answer to that. Steve just looked at the four in the pool and said, "I need a beer!" and headed inside.

I don't think any of us knew what to do. I am not sure breastmilk is usually something people bring to a swinger's party. ***Disclaimer: I am pro-breastmilk and pro-public breastfeeding.... it's nature and all that shit. It just doesn't belong at a swinger party!! Boobs are for pleasure in this environment. They really shouldn't be refreshments for your man during said swinger party!*** BUT, this is where my brain went:

There is a chance of HIV transmission from mom to baby in breastmilk. I'm not an expert in the pathology of HIV, but if it can go from mom to baby, I have to believe it can go from mom to me...…  We NEVER play without condoms to reduce the risk of exposure to bad things. At this point, we didn't even play with penises, outside of oral. Wait, is there even a condom for a boob? Is there a rule about this in the Swinger's handbook that really should exist? Is this even a thing? What is happening here!!??

Those last two paragraphs happened in about 1.7 seconds in my head. I watched Steve's getting smaller as he headed to the house. Grace was in hot pursuit. I turned my gaze down to the milkmaid, her husband, and Couple A. They were OBLIVIOUS to how rapid the exodus had just occurred. I turned and looked at Pete who was still staring at the milk bath growing in the shallow water of the tanning deck. He cleared his throat and called their names. "It was nice meeting you, he said, we really have to go. Our babysitter can't stay late," he lied. I breathe a sigh of relief and repeated his "nice to meet you."

All four of them told us goodbye and that they hoped we could do it again soon. I told them not to worry about getting out, as it was getting chilly and Steve's pool is heated.  They blew us kisses, which we returned and then headed up to the house.

We spent the next 25 minutes in Grace's kitchen trying to figure out what the actual fuck had just happened. We came up with nothing, except a promise to pick this party up where we had left off at a later date and with four fewer people.

A few days later I had lunch with Grace. She said Steve was very gracious telling Couple A that Couple B probably should find a new party trick. She said they took it very well, and really had not thought about the possibility that what happened could be unsafe. I told Grace I would make a mental note to ask the GYN about this at my next annual visit.  (Of course, I forgot to ask her.)

I have nothing further to add to this story that could make the ending any less uncomfortable. So, until next time!! 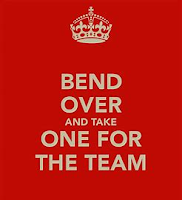