All I felt was intimidation. There aren't very many things that intimidate me. And then there's really strong, edgy, beautiful women. These two women. I wasn't scared of them. I assumed that they wouldn't like me. I'm strawberry shortcake in pasties. Their that hot alien killer character in Wreck It Ralph. No way they would ever talk to me.

I spent that hotel takeover and the next one too far into my secure shell and missed several easy chances to exchange names and "you look hot, girl"s. But I stayed quiet.

One of the two, Jen is local. The other, Katie is local to our second party home. We often saw Jen and her husband Heath at Colettes. We never spoke.

And then one day I noticed they were attending a bar takeover we planned on going to. I decided "fuck it. What's the worst that could happen." And I messaged them.

Fast forward. We met at the takeover, hit it off right away and had the best time ever. We text all the time. She's definitely a friend, not just a swinger chick I know.

But honestly, she scared me less because she's shorter. Lol.

About six months roll by and we attend a hotel takeover in Houston for NYE. Guess who is there. Katie. And she is as hot as ever. And her husband is also hot. And a large brick wall you really don't wanna mess with.

As soon as I saw her, I felt nervous. I have no idea why I'm like this. I'm probably nuts. But, whatever. It's working for me.

We got in our room and got dressed for the night. Our music is loud. Our speaker is insane. Apparently our neighbors had an insane speaker, too because we were both shaking the walls getting dressed.

As we headed out we passed them heading into the competing speaker's room. She said "hey."

Pete responds with "they're speaker keeping up with ours. Sounds really good!"

Her husband invited us in.

Pete nudges me and I follow them in. We meet 10 new friends. We exchange names and drinks went around. We danced and got our predrink going.

An hour later, we boarded the elevator and headed downstairs.

We had the best damn time. We rang in the new year dancing and laughing with our new friends.

I missed a few parties with this really awesome couple because I let my insecurities and preconceived notions fool me.

I'm really kicking myself now. I planned on giving her the pole back at the next party which is soon. I'm having to mail it because she's moving. Far away.

I will miss her!

Excuse Me Sir, Your Wife Has Been Drugged. Part One 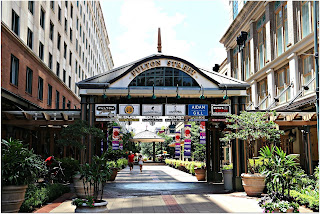 Sometimes, you don’t have great chemistry on the first date. Sometimes that’s for a reason!

Pete and I met another couple online, Aaron and Penny. Pete and Aaron had already chatted for a while and then they invited the ladies to join. We had a lot in common with this couple and we thoroughly enjoyed chatting with them.

We texted frequently for nearly two months before we had a free date open to meet. We were in the early months of our lifestyle adventure, and we were very much enjoying the “dating scene” of the lifestyle.

Our plans were simple. And typical. We met for dinner and then we would see where the night led us. One of the restaurants I frequent in New Orleans is Gordon Biersch in Fulton Street Square. It’s a chain restaurant, but it is must see if you like beer. Oddly enough, I do not! I just love the atmosphere here and the food is really good.

We were coming off of a string of successful nights out and we had some high hopes for meeting this couple! I could write an enti…
Read more